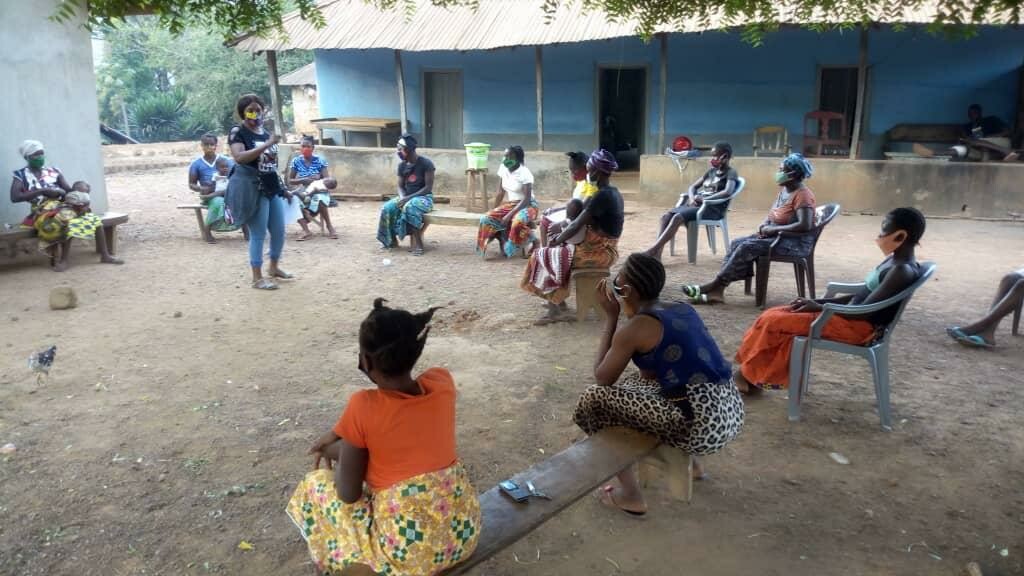 CAUSE Canada supports girls in Sierra Leone to address their menstrual health needs so they can stay in school.

At just fourteen years old, Amie* had already been pregnant and out of school for almost four years.

Amie lives in Sierra Leone, in the vicinity of a small community of about 20 thousand people. Up until she had her first menstrual period, she had been a model student at Gberia Timbakoh Secondary School and earned top marks. But like many other girls in her class, she could no longer attend classes regularly.

Amie’s first period marked the beginning of her menstruation poverty. She comes from a home that does not allow women to mingle freely with others during menstruation, not even to go to the mosque for prayers. That is because every month, for as long as her menstruation lasted, she was considered unclean.

Regularly attending school became impossible. Her grades plummeted, and soon she went from low marks to no marks at all. Amie became pregnant and had to drop out of school. Momodu*, the man who caused her pregnancy, is an okada rider; he drives a type of motorcycle taxi, common in the area. He did not take any responsibility for the paternity.

Four years passed. One evening, after a particularly gruelling day, Amie could not stand to be away from school any longer, so she decided she would go back the very next day. She woke up to find that she got her menstrual period.

The context of religious and cultural beliefs in her home expected her to stay home and miss school during her period. A familiar dread crept back. Before she had stopped going to school altogether, her classmates would make fun of her every month, knowing why she had been absent for five days. She was also anxious in case she got a stain on her clothes.

Menstrual poverty sentenced Amie to a bleak future. No pads meant no education—an immense potential never to be fulfilled. A cycle that was bound to be repeated for generations unless something changed.

On that fateful morning, Amie decided to take a risk and go to school. She hoped for a light day so that the makeshift cloth rags would not get saturated until she returned home. And if the rags did not hold, that nobody would notice or point out if she got a stain on her clothes.

She steeled herself for what might happen at school.

Fortunately, that day turned out to be a red-letter day, marking a turning point in Amie’s menstrual poverty. She was one of the beneficiaries of sanitary pads that CAUSE Canada distributed to 50 women and girls at Gberia Timbakoh School, in the Sulima chiefdom, Falaba District.

Amie no longer had to keep using strips of cloth rags during her menstruation. Instead, moving forward, she could use sanitary pads. These pads were more hygienic, reliable, and comfortable. With her menstruation better managed, she could concentrate on her schoolwork, instead of worrying about getting a stain on her clothes.

Her attendance and punctuality in school improved drastically, and as a result, so did her academic performance. On taking the first term class test, her position in class rose from 18th to 3rd.

The menstrual products Amie received through the CAUSE Canada intervention provided her with a way to manage her menstruation with dignity and peace of mind. More than just a simple product, they meant the opportunity for an education, spelling a brighter future for Amie, her family, and her community.

CAUSE Canada supports girls in Sierra Leone to address their menstrual health needs so they can stay in school. As part of their Covid-19 prevention and response projects, CAUSE Canada provided menstrual hygiene kits in Sierra Leone, Guatemala, and Honduras. This CAUSE Canada SLP intervention was made possible through the Girls and Women monthly meeting, under the Canadian Fund for Local Initiatives project. To learn more about CAUSE Canada’s work partnering with hard-to-reach rural communities in Central America and West Africa to empower people living in extreme poverty to meet their basic health, education and livelihood needs, please visit cause.ca.

*Names have been changed