Looking towards an inclusive movement for gender equality 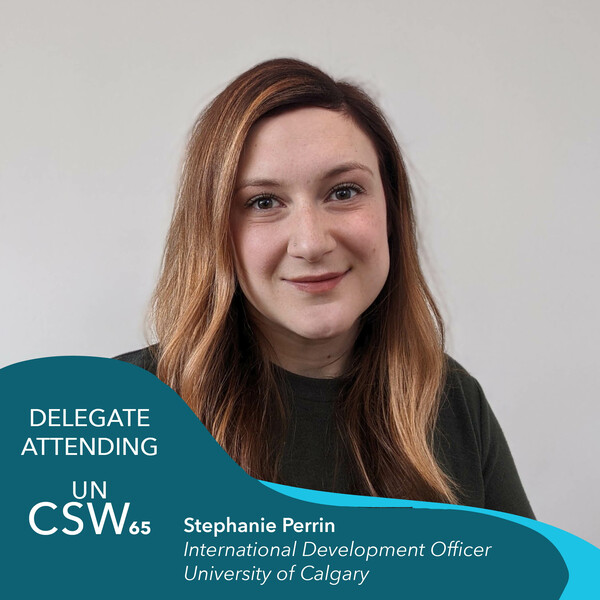 Stephanie Perrin (she/her) is a cisgender woman working at University of Calgary International in Mohkinstsis on Treaty 7 territory.

Recently, I spoke about gender equality on a panel assessing the achievements and challenges of the United Nations Sustainable Development Goals (SDGs). Developing my presentation and sharing it with a group of bright University of Calgary students raised questions for me about the effectiveness with which the SDGs address gender equality. I had an invaluable opportunity to put these questions to the test as a delegate with the Alberta Council for Global Cooperation during the 65th Commission on the Status of Women (CSW). CSW’s annual session convenes Ministers, government officials, and civil society representatives for the largest gathering of gender equality advocates in the world to set policy and standards that promote the rights of women and girls[1]. Attending CSW events over two weeks in March, the successes and failures of gender equality and the SDGs became more real.

Progress for gender equality
Decades of advocacy and leadership from women’s movements and gender equality advocates contributed to the creation of SDG 5, a dedicated gender equality goal, and 51 gender-specific indicators integrated across the 17 SDGs[2]. Reports on the goals show they are indeed advancing the rights of women and girls. More girls are attending school, fewer girls are forced into early marriage, more women are serving in parliament and positions of leadership, and laws are being reformed to advance gender equality[3]. Recognizing, maintaining, and advancing these accomplishments was a major theme at CSW. Despite the significant threat posed by the global COVID-19 pandemic to 20 years of progress on gender equality, my eyes opened to the unshakable optimism and determination held by leaders and advocates around the world.

I hope to see this optimistic drive applied to expanding the movement for gender equality. While I researched my panel presentation, I became increasingly dissatisfied with the SDGs’ limited scope for gender that only refers to equality between men and women, boys and girls. Equality between those groups is certainly a necessary goal. What is missing is inclusion of the gender identities and gender expressions[4] of transgender, non-binary, or gender diverse people. My discomfort continued at CSW, where I repeatedly heard statements advocating for the rights of “women and girls, in all their diversity.” Again, a worthy cause and there is potential in this language. Analyses of similarly broad terms in the SDGs describe it as a “partial success” for improved inclusion of all gender identities and expressions[5] and assert such terms implicitly include transgender people[6]. However, lack of specificity can also contribute to ongoing discrimination.

Who is left behind?
A 2016 report from the Institute of Development Studies finds that policies and standards that are not explicitly inclusive of diverse gender identities and expressions create room for selective enforcement and/or avoidance of implementation[7]. Broad language can erase the rights, needs, and leadership of transgender, non-binary and gender diverse people who are so often at the forefront of gender justice activism, particularly those in the global south. No one knows this better than the NGO representatives who advocated for the inclusion of diverse gender identities during interventions at CSW’s official meetings[8].

Yet, there is no mention of gender identity or gender expression in the 65th CSW Agreed Conclusions.  This outcome document sets standards for policy and actions on gender equality by governments, the UN, civil society organizations, among others[9]. Again, research shows that standards that are silent on diverse gender identities and expressions can lead to exclusion of those groups when policy goes into practice[10]. The Agreed Conclusions are an example of how global standards often lack explicit terms to strengthen accountability, and, instead, give governments room to maneuver based on existing stereotypes and socio-cultural beliefs about gender identity and expression[11]. Similar challenges exist within the SDGs. What is at stake in the language of these global frameworks? The safety and survival of trans, non-binary, and gender diverse people. Looking at the big picture for the gender equality movement, exclusion of diverse gender identities and expressions perpetuates a limited vision of what is possible for a gender just society.

Looking to the future
The pursuit of a more inclusive gender equality movement is not new and many milestones have been reached. For example, first published in 2007 and updated in 2017, the Yogyakarta Principles plus 10 put forward standards for governments and other decision makers to apply international human rights law to gender identity and gender expression, as well as sexual orientation and sex characteristics. These principles were a landmark achievement built on decades of advocacy. Those of us who are engaged with the SDGs and CSW through community activism, non-profit organizations, and government institutions can join and amplify voices that are already questioning foundational assumptions about who is included in gender equality. Doing so invites us to reconsider a binary 50/50 agenda and collectively imagine more for a gender just world.

When reimagining gender equality, what comes to mind for me are two actions recommended at CSW: disaggregate data and collaborate across movements. Collecting and sharing data that clearly identifies gender identity, sexual orientation, race, economic status and other factors creates the opportunity to account for complex lived experiences[12] and to see how privilege and vulnerability “interweave through people’s lives[13]”. Used across movements, this kind of data can be a tool to hold leaders accountable to policies, laws, and programs that meet varied needs, including those of transgender, non-binary and gender diverse people. We can (and must) advance gender equality with intersectional data and intersectional movements that include gender identities and expressions, in all their diversity.

[7] Majeedullah, Aimen, Kimberly Wied, and Elizabeth Mills. Gender, Sexuality and the Sustainable Development Goals: A Meta-Analysis of Mechanisms of Exclusion and Avenues for Inclusive Development. No. IDS Evidence Report; 206. IDS, 2016.