Heat and Dichotomies: The 74th United Nations General Assembly from the eyes of a youth delegate

The heat. That was the first thing I noticed stepping into the New York summer haze. The heat was also tangible within the blocks of barricaded streets surrounding the United Nations Headquarters. Heat that hung in the air, not because of the sun or the humidity, but because of the weight of the discourse taking place. If it took armoured cars, NYPD, private security, and scores of other uniforms to fortify mere conversations being had at the 74th General Assembly, change had to manifest, no? As an attending youth delegate, I aimed to “see how the adults do it”; how they have these conversations in these big buildings and (attempt to) drive these global changes. Upon passing through the barricades, I found out very quickly that despite the countless degrees celsius permeating the air, the clashing of contrasting ideologies, and the loud voices asking to be heard, the heat begged still to be raised higher.

Let me define what I mean by the ‘heat’. We all appreciate when we share an opinion and others agree or understand immediately. We also appreciate, though not as much, when we share an idea and others understand after limited debate. What we do not appreciate as much, is when we share a personal experience or opinion and no amount of convincing delivers agreement or understanding. This is also when things get really uncomfortable. In an undergraduate lecture on leadership, a professor shared that this is exactly the situation you want to find yourself in - seek the situations that give you discomfort because only then change is driven. This heat begins to brew when someone challenges your worldview. How I see it, if you ignore the heat or discomfort you choose to ignore personal growth. Instead, channeling that heat into open-mindedness pulls you out of the discomfort and into a newfound comfort. Seek comfort in discomfort.

So, when I think back to the lack of this important discomfort within the barriers of the UN Plaza, I was witnessing the consistency to which most delegates stayed in their comfort zone; they remained hesitant to the rising heat. The conversations or keynotes were not light in nature; famine, violence against women, transboundary conflict and migration crises were only some of the surfacing topics. Don’t get me wrong; people were there with hopes of seeking social change, for potent advocacy and global justice. However, some were too well-versed in neutrality. A major theme of UNGA 74 was sustainability. Holistic sustainability cannot be achieved until a significant lack of it is acknowledged. Diplomatic approaches water down urgency. Weren’t the lives and livelihoods of global citizens on the line here? Perhaps that’s the youth delegate in me talking.

Distinct contrasts existed between the world behind the barriers, the independent side events, and the world I was used to. The world “behind the barriers” refers to formal events that were central to the UN Sustainable Development Goals Summit. The side events took place during the main Summit, but were curated by civil society organizations and nonprofits from around the world. As I attended side events organized around the Assembly, various dichotomies began to take shape. The first of which were the voices. The loudest voices belonged to women and youth; coloured women and youth more so. In ordinary reality, however, where even without a platform to speak from or a mic to yell in, the loudest voices are those of men; white men even more so.

Another dichotomy existed in the type of discourse taking place. On one hand, there was the problem-based discourse where delegates would simply list the growing issues. On the other hand, was the solution based discourse. In this approach attendees would share a local or global issue, but would follow it up with potential mitigation strategies or solutions. The latter, of course, was the most effective because delegates were able to first bring light to a crisis; then others would bring to the table possible solutions out of their local context and into the context of others. Solution-based discourse acknowledged that perhaps a direct solution was not readily available but experiences of those on the other side of the world may be molded towards progress.

In navigating these contrasts and dichotomies, I was able to discover the true global change-making stage. More likely than not, it is civil society that drives change. The civilians from across the world who were not formally invited, but were still present because their quality of life depended on it, were the ones who had true impact. To them it was not a ceremonial proceeding but a matter of safety, health or peace. 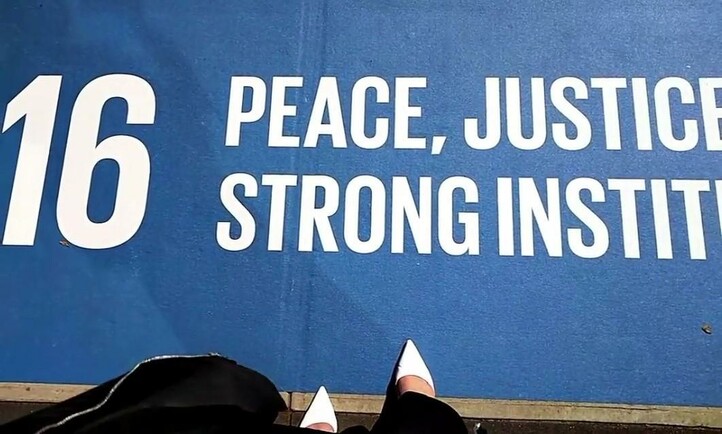 On a more personal level, the heat was turned up notably when I was nominated to speak at the Civil Society Organization Forum. With only an hour to prepare something worthy of sharing at the UN Headquarters, I was leaning towards “letting the adults handle it”. If the most impactful lessons I learned were from those who were the rawest in describing their context and experience, then it was my responsibility to do the same. I began by defining the reality we all live in; “a reality where our youth have easier access to violence than they do to education”, a reality where “democracy is shaken”; where women and children consistently top worldwide lists of most marginalized; where our future generations lack the space to share their concerns about inheriting the future; and where nations neglect the safety of their people to secure material borders. This was a summation of the stories that had shaken me most during my time in New York, as well as, my own life experience.

Of course, I could not forget to incorporate solution-based discourse in my time on the floor. I finished by directing the audience’s attention back to the theme of the Assembly: sustainability through the Sustainable Development Goals. If we were to truly aim for such a thing, then the very paradigms with which we approach our day to days, must be shifted to sustainable ideology; not only applying sustainability to our economies, environment and education, but also to our leaders and governing bodies.

The entirety of my experience redefined my understanding of driving global sustainability. In order to solve the crises of the world, we have to first begin within our own contexts, be it local or individual. A city or town's circumstance in sustainability can be defined by the likes of a Voluntary Local Review. A VLR paints each Sustainable Development Goal within each distinct social, economic and infrastructural situation. Once each puzzle piece is clearly defined, the rest of the mosaic can come together. The trick to truly grasping one’s own context in the world, lies in being thoroughly exposed to the context of others - change is on the other side of discomfort.