This year marked the twenty- fifth anniversary of the Fourth World Conference on Women and the adoption of the Beijing Declaration and Platform for Action which happened in 1995. This conference was very important for gender equality and empowerment for women and girls as it also was marking the five-year milestone towards achieving the Sustainable Development goals of the 2030 Agenda for Sustainable Development. I was selected as the Alberta representative on the Inter-Council Network Youth Delegation to the Commission on the status of women at the United Nations in New York in March. 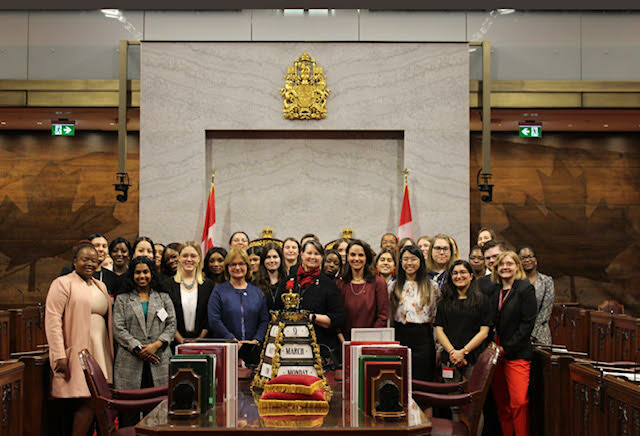 I was honoured to be selected as a youth delegate to attend the World Conference on Women at the United Nations. The first person I called to share the news with was my grandmother because I have memories of the stories she shared with me about her watching the first Beijing conference on television. She had shared that the women at the inaugural conference had inspired her to be an educator and to contribute more to the community. When I gave her the news she was very happy for me, she was so excited you would have thought she was the one attending the conference. Getting the news that the conference was cancelled because of Covid-19 was devastating.

However, my devastation was short-lived as Senator Marilou McPhedran invited all the youth delegates to the senate in Ottawa instead. She and her team arranged the conference in less than a week. Though it was not the United Nations in New York as I had hoped for, the visit to the Canadian Senate was informative, engaging, and enlightening. It was a phenomenal and unforgettable experience. My grandmother beamed with pride as I shared my experience of the visit to the Senate.

Meeting 5 of the other delegates chosen by Inter-Council Network (ICN) from all over the country was one of the highlights of my experience. I learned a lot from the conversations we had during our overly long dinners and our time at the house, sharing our lived experiences and lots of laughter.

Our host, Senator Marilou McPhedran, was quite welcoming thus increasing our level of comfort. She reminded us that we deserve a seat at the table. That resonated with me because a part of me was doubting if I have anything to bring to the table. Being in the room with all the other delegates and the different ministers and senators that came to share their wisdom and knowledge was very humbling. They kept reminding us that the youths are wanted and needed in decision making rooms to ask the tough questions and to share their views.

It was inspiring to see the youth actively speaking truth to power, asking the senators and ministers about issues being faced by women in Canada and around the world, and brainstorming ways in which we can all be part of the change. This was an amazing experience. I appreciated the authenticity of the speakers and hearing them speak freely, sharing their experiences as women in a largely male dominated profession. This conference made me realize that the fight for women’s rights is not close to over, and most importantly that the future is female, and the future is the youth.